Playing music in the workplace enhances staff performance according to a new study, but it’s not just classical which gets the masses motivated.

In fact, dance music contributed to the highest overall accuracy and fastest performance across a range of work tasks, and when no music was played participants produced their most inaccurate responses – the study from Mindlab International shows.

88% of participants produced their most accurate test results, and 81% completed their work fastest when listening to music whilst performing work tasks, The Telegraph reports. 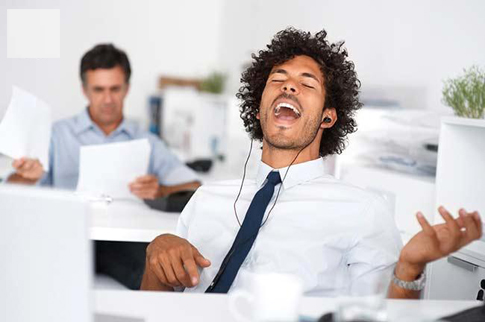 Participants completed the tasks, either with music playing or not, to test which variable had the greatest effect on speed and accuracy of test responses.

The type of music listened to encouraged better results relevant to certain tasks. When compared to the no music variable, classical music improved accuracy of solving mathematical problems by 12% whereas pop music caused participants to complete data entry tasks 58% faster, and reduced mistakes by 14%.

Pop music was also the number one genre for fast spell-checking, and was on the same chart as dance music when providing the fastest overall performance for getting work done.

Ambient music accounted for the highest accuracy levels when participants were given equations.

Dr David Lewis, Neuropsychologist and Chairman of Mindlab International comments on the findings: “The take-home message is that music is a very powerful management tool if you want to increase not only the efficiency of your workforce but also their mental state, their emotional state – they’re going to become more positive about the work.”

We welcome our new Head of Engineering!

As our new Head of Engineering, Chris Heathfield will become a vital member of our management team, he will concentrate…